Occasional daytime sleepiness or snoring is often a problem for many Houston residences, but some people find that it is a more chronic condition. While there are many sleep disorders suffered by Americans, what many mistakes for being tired during the day, or just a loud snorer at night, could be caused by sleep apnea, and left untreated, studies have shown that it could lead to an increased likelihood for car accidents, high blood pressure, stroke, diabetes, pregnancy complications, or heart failure. Daytime sleepiness and snoring are serious issues that should always be discussed with a dentist or a physician, both of whom can treat them since it can influence so many aspects of one’s life.

What is Sleep Apnea?

Did you know that approximately 90% of people who snore may actually suffer from an undiagnosed sleep disorder? Sleep apnea is a potentially life-threatening sleep disorder that can have many consequences including chronic daytime sleepiness and fatigue, cardiovascular problems, even stroke. It is important for everyone to know the signs and symptoms of apnea in order to proactively treat this serious problem and to prevent the progression of apnea and improve the overall quality of your or your loved one’s life.

Imagine spending half of your night underwater. Similar to the effects of not being able to breathe underwater, apnea is defined as cessation of airflow for more than 10 seconds, which means that patients can go for periods of 10 seconds or more without sending the necessary oxygen they need to their brains. Commonly a side effect to snoring, these periods of cessation repeat themselves as much as 20 times per hour during sleep, increasing the likelihood of serious complications, however snoring is not necessarily an implication of sleep apnea.

Snoring is not just a bad habit that affects anywhere from 30% of women to more than 40% of men. The act of snoring can be a sign of a more serious sleep disorder called sleep apnea, which, if left untreated, can lead to neuropsychiatric and cardiovascular problems including depression, congestive heart failure, even stroke. 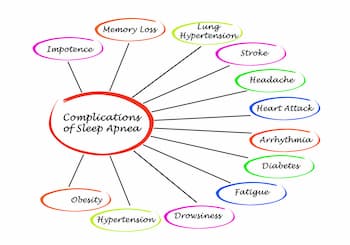 Medical dictionaries define snoring as a rough, rattling noise made while breathing during sleep, caused by the vibration of the back of the roof of the mouth and the uvula (dangling structure at the back of the mouth). When a person inhales and exhales, the air is on its way to the lungs, traveling past the tongue, through the soft palate, uvula, and tonsils. When awake, the muscles in the back of the throat tighten, holding these structures in place, which prevents them from collapsing and vibrating in the airway. For a patient who experiences sleep apnea symptoms, the soft palate and uvula may collapse during sleep, resulting in snoring, cessation of breath, or choking.

More important than damaging personal relationships, the act of persistent snoring can be a symptom of a sleep-breathing disorder that narrows the airway and decreases oxygen flow to the brain. Often one of the leading sleep apnea symptoms, snoring can also contribute to the development of high blood pressure, as well as heart and lung complications, and thus, should be taken very seriously.

In this instance, patients experience a pattern of snoring where the patient snores loudly up to a certain point where, for a period of time—about 10 seconds or longer—they’ll stop breathing completely. Then all of a sudden, the sleeping patient will open their mouth and gasp for air, sometimes experiencing a choking sensation. This vicious cycle can repeat itself several times an hour, during a single night.

Periods of sleep where the patient does not receive air for 10 seconds or more are two obstructive sleep apnea symptoms that lead to two significant, but treatable medical problems:

Drowsiness during the day coupled with morning headaches, a dry or sore throat in the mornings, nighttime snoring, frequent waking’s during the night, or waking to feel as though one were choking or gasping could be signals of a more serious illness. If these or other symptoms are presented to a doctor or dentist, he may recommend further testing for sleep apnea. The only way to know for sure is to spend a night at a sleep clinic under the watchful eye of a sleep doctor who will administer tests for facial movements, breathing rate, and snoring. These tests, called polysomnography (PSG) or sleep tests. Using the results of the polysomnography, a diagnosis as to whether or not the patient has sleep apnea can be given.

One of the main complaints that lead people to treatment is nighttime snoring. Often it is the spouse who advises the patient to talk to their dentist or doctor about the problem. Snoring is often associated with sleep apnea. If snoring is heard at night with lapses in breathing and choking or gagging sounds, it could be a sign of sleep apnea. Not everyone who snores suffers from sleep apnea. In order to be diagnosed, the patient must have several episodes where breathing is stopped during the night. Snoring is not the only symptom, though, and some sleep apnea sufferers never snore.

The two main types of sleep apnea depend on the cause. The more prevalent of the two is Obstructive Sleep Apnea (OSA). This occurs when the soft tissue in the back of the throat falls in on itself during sleep, blocking the airway. Many dentists have successfully treated this form, usually through obstructive sleep apnea surgery – such as tracheostomy or orthognathic surgery. A dentist might also fit a sleep apnea oral appliance in the patient’s mouth to open up the airway at night. The other type is known as Central Sleep Apnea (CSA). This is not as common and results from the brain failing to send the proper signals to breathe during sleep due to problems in the breathing control center of the brain. The patient is more likely to need a continuous positive airway pressure (CPAP) breathing mask to help him sleep if he suffers from this form. 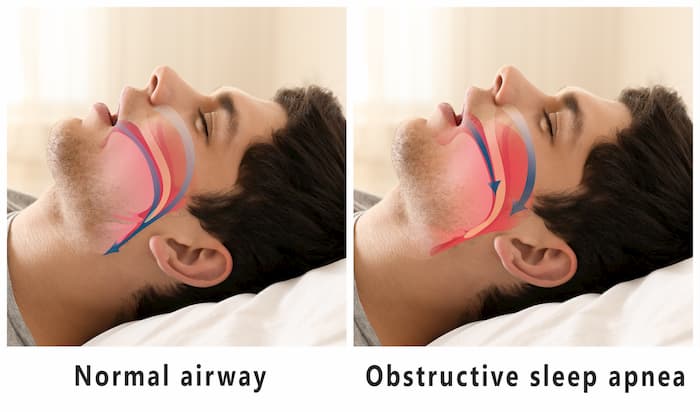 The treatment options for sleep apnea depend on the symptoms and diagnosis of the type suffered. Discussion with one’s dentist or doctor if sleep apnea or snoring is suspected. The sooner a dentist can begin treatment, the sooner the patient can get a restful night’s sleep.

Symptoms of daytime sleepiness, nighttime snoring, or repeatedly awakening during the night should guide the sufferer to a medical professional for a consultation. After an overnight sleep study has been done, called polysomnography, the patient’s doctor will determine if a diagnosis of sleep apnea should be made. Then, possible causes of sleep apnea for that patient are considered.
Several factors could be causes of sleep apnea of the obstructive kind. Occasionally in people, the muscles at the back of the throat relax too much. This leads to the soft tissues such as the tonsils, tongue, and uvula to sag down and temporarily block the airway. Usually, this occurs more often when the patient is asleep on his back. Alcohol, tranquilizers, and sleeping pills are designed to relax the entire body, and as a result, these can lead to sleep apnea, disrupting the patient’s slumber rather than aiding it. It is not just a matter of the muscles relaxing. Anything that constricts the airway can cause sleep apnea. A naturally narrow neck or throat or swollen tonsils or adenoids could be a risk factor since all of these could block the airway and cause sleep apnea.

If you’re interested in sleep apnea treatment in Houston, contact Medical Center Dental Group today by using our online form, calling 713-795-5905, or by visiting our office at 6560 Fannin St #1424, Houston, TX 77030. We look forward to helping you find better sleep!

Our Office is OpenSchedule Appointment
+ +